The posts on this page are from a variety of Salem blogs and the views expressed are those of the individual blog author.

This summer is a great time to visit Salem Massachusetts. Get outside and breathe in the fresh sea air while participating in one of our many locally run tours. With…

The post Spend This Summer Outdoors On A Tour In Salem MA! appeared first on Destination Salem.

Salem, Massachusetts is a great place for family-friendly activities and dining during your holiday vacation! Come for the Witch Trials of 1692 and maritime trade. Stay for the art, restaurants,…

One of the best ways to see Salem, Massachusetts and learn about local history is on foot with a guided walking tour around town. Salem…

The post Which Salem Walking Tour Should I Take? appeared first on Destination Salem.

After a long tough winter due to the COVID-19 pandemic, many restaurants and businesses in Salem, Massachusetts will reopen their doors for the season on…

Spring into your next visit to Salem, Massachusetts with family fun at our museums and attractions, new art exhibitions, outdoor walking tours, and so much…

Spring into your next visit to Salem, Massachusetts with family fun at our museums and attractions, new art exhibitions, outdoor walking tours, and so much…

A self-guided audio tour focusing on Salem’s African American history is available for download on your mobile device. Sponsored by Voices Against Injustice, the tour…

Salem, Massachusetts is a history lover’s paradise. With colonial and maritime history, and the history of the Salem Witch Trials, along with spectacular architecture dating…

Salem, Massachusetts is a history lover’s paradise. With colonial and maritime history, and the history of the Salem Witch Trials, along with spectacular architecture dating…

While an awful lot of people were watching the Patriots win their first game of the season, about 25 of us were enjoying a fascinating walking tour hosted by Historic Salem, Inc. The tour, led by historian Margherita Desy, was entitled, “Looking South: Salem’s South River.”

We began at the Gedney House on High Street, which once faced the water, and walked to Central Wharf, which we learned was once called Forrester Wharf, at the Salem Maritime National Historic Site. The tour was fact-filled, focusing on the changing topography of Salem over the past 200+ years, and touching on some of the devastation of the Great Salem Fire of 1914. 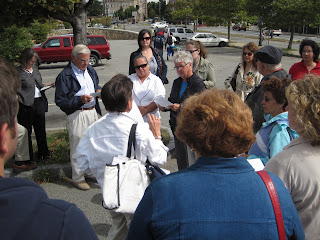 In the photo above, we are standing in the municipal parking lot in Riley Plaza. Much of the tour took us over landfill. This spot looks up to Mill Hill and over toward the police station which was once the Mill Pond. The mills in Salem ground wheat, snuff, and chocolate (not at the same time, we hope). 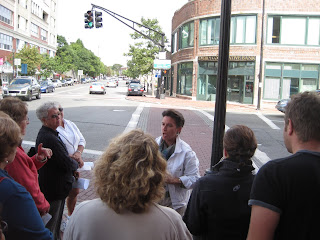 Here we are on the corner of New Derby Street and Lafayette Street. The building on the top left of the image where Engine House Pizza is located is the only building on this block that survived the Salem Fire. 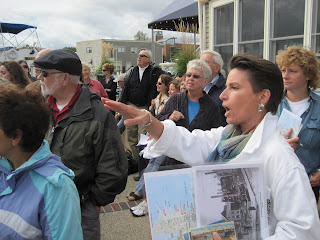 From this spot (above) on the South River Harbor Walk, adjacent to Finz, we learned about the Pequot Mills (now Shetland properties), which was the largest building under one roof when it was built. 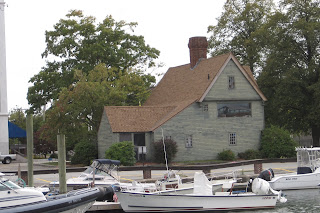 Adjacent to Shetland Properties is the Pequot House, above. This house was built for the 1930 tercentenary of the settling of Massachusetts. It is not a First Period structure. When it was built by the Pequot Mills, it was for interpretive purposes. They had costumed guides and decorations that they believed represented the 17th century (but apparently they really represented the 18th century).

I always new this house was a replica, but I never knew why. The information is particularly useful because we have received letters at Destination Salem from visitors who are horrified to see the picture window in a 17th-century structure! 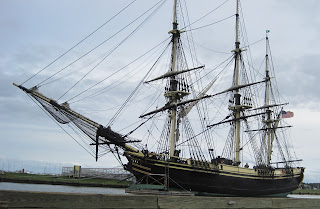 And we ended on Central (formerly Forrester) Wharf, adjacent to the tall ship Friendship (which is on Derby Wharf).